We don’t work as a porter for resumes.

Economic performance in the first half of the year, what are the cities with no future and potential

From: 本站 Author: admin Posted: 2018-08-25 10:45:48 View: 31
GDP has always been an indicator for people to love and hate. Some people say that since the GDP, there has been less green hills and green water, and more and more high housing prices.

GDP has always been an indicator for people to love and hate.

Some people say that since the GDP, there has been less green hills and green water, and more and more high housing prices.

Although GDP may not fully reflect the overall picture of the economy, it is undeniable that for developing countries like ours, it is still our core measure of economic development.

Which cities are the stars of the future, and which cities have the least future, the GDP can be analyzed one by one.

I have always liked to compare GDP to the college entrance examination scores. Although it may not fully reflect your overall quality, it is fair and economically relevant in some sense.

01, the first half of the GDP transcript, a few happy couples!

In the first half of this year, there were frequent economic events, industrial transformation, financial de-leveraging, and a tight trading environment. The stock market was volatile. 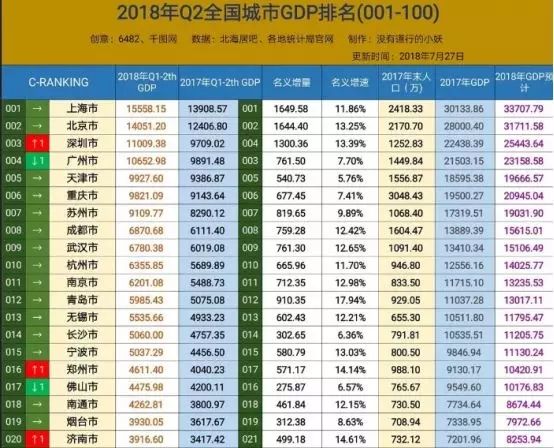 First, the GDP growth rate is divided into nominal and actual growth rates.

In general, the actual growth rate excludes the price factor more meaningful, but there is a flexible man-made operating space. On the contrary, the nominal growth rate is not easy to falsify, and the official statistics released are also counted according to the nominal value.

Here we also focus on nominal growth, and selected the top 20 of the list as a sample for comparison.

02, the old line of the North to Guangzhou and Shenzhen

The old-fashioned line goes north to Guangzhou and Shenzhen, and it is still a two-trillion club that rides the dust.

The most worth mentioning of this is Guangzhou. In the first quarter of this year, Guangzhou's nominal growth rate was 5.35%, and the actual growth rate was only 4.3%. Therefore, the phrase "Guangzhou is not good" is popular. However, from the situation in the second quarter, the growth rate of Guangzhou began to return.

However, compared with Shenzhen, GDP has been a foregone conclusion, and the gap has gradually increased.

Beijing is accelerating the catch-up of Shanghai. Regardless of the growth rate or the incremental leveling, Beijing has an aggressive posture in Shanghai, the economy's largest city.

Tianjin, Chongqing, and Suzhou have been the second camps of GDP in recent years, but they also face different problems.

Tianjin is expected to continue to stall.

Last year, Tianjin began to squeeze water, reducing solid investment, and the growth rate was only 3.6%. In the first half of this year, there was still no callback, with a nominal growth rate of 5.76% and an actual growth rate of only 3.4%.

This score is among the top 20, which is the lowest growth rate. It seems that Tianjin has a long way to go.

The star city of Chongqing surpassed Tianjin in 2017, and has achieved 9.3% growth, which is not bad. However, in the first half of this year, Chongqing suddenly stalled. What is the problem?

Checked, the reason is that Chongqing's industrial growth rate and fixed asset investment decreased this year, industrial added value decreased from 10.4% to 1.8%, and solid investment fell from 12.3% to 5.5%.

Chongqing will also face the transformation problems that all industrial cities face.

In recent years, Suzhou has also faced difficult industrial upgrading and transformation, and the growth rate is also slowing down. However, in general, the first half of this year, the nominal 9.89%, the actual growth rate of 6.9%, in such a foreign trade environment, for the export-oriented city like Suzhou is still barely acceptable.

It is worth mentioning that if we continue to maintain such growth rate, Suzhou is likely to surpass Tianjin and Chongqing in the short term and return to the fifth.

Of course, the three cities are still firmly in the second quarter of GDP, and at the latest next year, they will all enter the two trillion clubs.

These seven cities are the remaining one trillion club members last year.

It should be said that the first four have maintained a relatively high growth rate in recent years. Under the overall economic downturn, economic performance must not be dazzling.

Chengdu's GDP has already accounted for 37.6% of Sichuan, and Wuhan has reached 38%, forming a provincial development as the leading province.

In addition, the “national central cities” of Zhengzhou and Xi'an, as well as Hefei, which has obvious advantages in the same provincial capital, are showing rapid growth. In addition to the slow growth of Changsha in recent years, the rest of the provincial capital cities have achieved good results.

Hangzhou has long been the first in Zhejiang, relying mainly on the advantages of the Internet and high-tech, and the battle for people is also quite eye-catching.

At present, there is even a saying that there is a North-Guangzhou-Shen-Hang-Hang, which is generally seen, but there is still a large gap between the economic aggregate and the population and the front line.

However, Jiangsu proposed to raise the first position of the provincial capital of Nanjing. From the perspective of efficiency, Nanjing still maintained high growth in the first half of the year, but the increase and the expansion of Suzhou still showed an expansion.

In the past few years, Wuxi, which was surpassed by Nanjing, began to increase its speed. However, as an export-oriented city like Suzhou, it also faces pressure from the foreign trade environment and transformation and upgrading.

After the slowdown, Ningbo also began to call back, with a nominal growth of 13.3 percent, an actual 7.8%. This year, it will enter the trillion club without any accident, and it will be a big battle. Although Ningbo is low-key, the import inflow is good, but the export-oriented economy city The pressure still exists.

This is similar for Foshan and Dongguan.

As a prefecture-level city that has risen rapidly in recent years, Nantong has achieved quite good growth. GDP has only been in Wuxi in Jiangsu Province. It seems that the effect of overseas overflow is still significant.

Shandong, another economically balanced province with a balanced development, has been ranked third in the province in terms of GDP. From the perspective of growth rate, it is about to complete the catch-up of Yantai, but there is still a big gap from the first Qingdao. of.

06. In summary, the main points are as follows:

1) Overall, the economy is still in a slowing trend. In the current complicated domestic and international environment, the downward pressure still exists.

2) The economic status of the four first-tier cities in the north, Guangzhou and Shenzhen is still unshakable in the short term. Other second-tier cities still have a huge gap with the front line.

4) Corresponding to the strong provincial capital is the slowdown of the foreign trade star city, and in the current complicated international trade environment, it will face greater trade and upgrading and transformation pressure, but from the growth rate in the first half of this year, it is not like Everyone imagines pessimism.

5) Under the new situation of slowing economic and population growth, the competition between cities in the future will become more and more fierce, and the performance will be a fierce battle between cities.

07. Finally, we have compiled the GDP of these 20 cities and the current house prices are as follows: 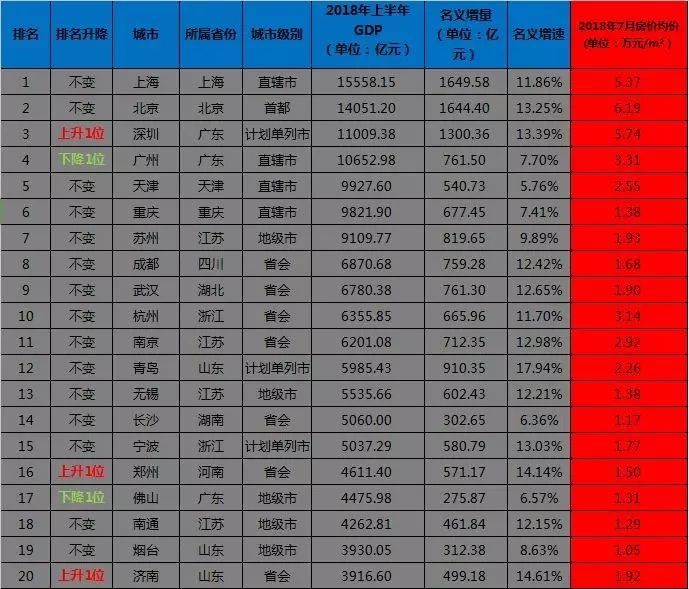 Obviously, the formation factors of housing prices in various cities are complicated, because we find that the average price and price increase are not necessarily positively related to GDP.

For example, Nanjing and Suzhou are the same in Jiangsu Province. In terms of GDP, Suzhou is far ahead of Nanjing. However, there is a big gap between Suzhou and Nanjing.

Because in addition to the economic aggregate of GDP, Nanjing's provincial-level city status and the advantages of science, education, culture and health resources or other factors will ultimately be reflected in housing prices.

The price of each city is like a complicated stock report, and GDP is only one of the important reference indicators.

But I have to think about it, because when you buy a city house, to some extent, you buy the city stock, the success or failure of the city also binds your destiny to a certain extent.

08, so from the trend of GDP, we give you the following suggestions for a sincere choice of buying a house:

1) Beishang Guangshen is still an unshakable first-tier city, and behind them are the top resources in China. Therefore, the short-term small correction is often the biggest test of the choice of entering the market. From the historical point of view, every period of housing price rise is initiated from the first-tier cities. For the front line, everything only takes time.

2) The second-tier cities began to differentiate, which are divided into four categories:

a. The second-line star city with a good completion degree of transformation, representing the city is Hangzhou.

Relying on the transformation of the Internet and emerging industries, and even starting to siphon Shanghai's Internet talents, to some extent, such a second line can only solidify the foundation, solidly complete the industrial transformation and upgrading, and continue to attract population inflows. In the future, it will not rule out that it can truly join the first-tier city club.

Therefore, such second-tier cities can choose the right time to board, and the future can be expected.

b. Second-tier cities with strong political resources, this kind of differentiation is the biggest

There is a strong provincial representative of Wuhan, regardless of resource advantages or economic growth can maintain a good momentum.

However, in the two municipalities directly under the central government of Tianjin, Chongqing has a stall situation, the same point is that the fixed investment has been greatly reduced, so it is also a warning for cities that still rely on fixed investment to achieve high growth.

Of course, the biggest temptation of such cities lies in the resources of science, education, culture and health and high-level urban welfare, such as Tianjin, which was opened up in an hour and was swept by 500,000 people.

Therefore, when you are not willing to stay in the north and the depths, and do not want to go to the eastern coastal areas, in such a strong provincial capital era, the optimal choice of real estate assets may be their respective provincial capitals or strong political resources cities.

Such cities are under great pressure in the current domestic and international economic environment. To some extent, this is also the biggest loser in the urban pattern in recent years. For such a city choice, it is a cautious choice.

However, for the core foreign trade second-tier cities in the Yangtze River Delta, the Pearl River Delta, similar to Suzhou, Wuxi, Ningbo, Foshan, Dongguan, have begun industrial upgrading and transformation, including third-tier cities around the first line of urban agglomerations, similar to Kunshan. , Nantong, Huizhou, etc., as well as the core cities of Shandong and Fujian, the strong coastal provinces, Qingdao and Xiamen, the fundamental trend is still good, in the long run, there is a suitable and acceptable timing of getting on the train, still a good price/performance ratio. selected.

And from a certain perspective, such cities are more representative, because for the vast number of prefecture-level cities where resources are scarce, their transformation and upgrading success is more useful and benchmarking.

Prev: This housing company is constantly pursuing product upgrades. How does it innovate high-end residential buildings?

Next: Vanke thawed: How does HR become a strategic partner of management?